I’ve just come home from a really, really special event – by invitation only – hosted by Amy and James Harrick of Ceremony Magazine for Bay Area wedding pros (www.ceremonymagazine.com). First of all: thanks for having me, Amy and James! It was quite spectacular, and for me the evening was full of discoveries. Hard to believe, but even for me, the longtime San Franciscan by choice, the location was my first discovery: I had never been on Treasure Island in 13 years! Treasure Island is an artificial island in the middle of the San Francisco Bay, where the Bay Bridge takes a little rest before hopping all the way across to Oakland on the other side. Easy to imagine, the views from Treasure Island are just breathtaking – the whole San Francisco skyline just across the water! 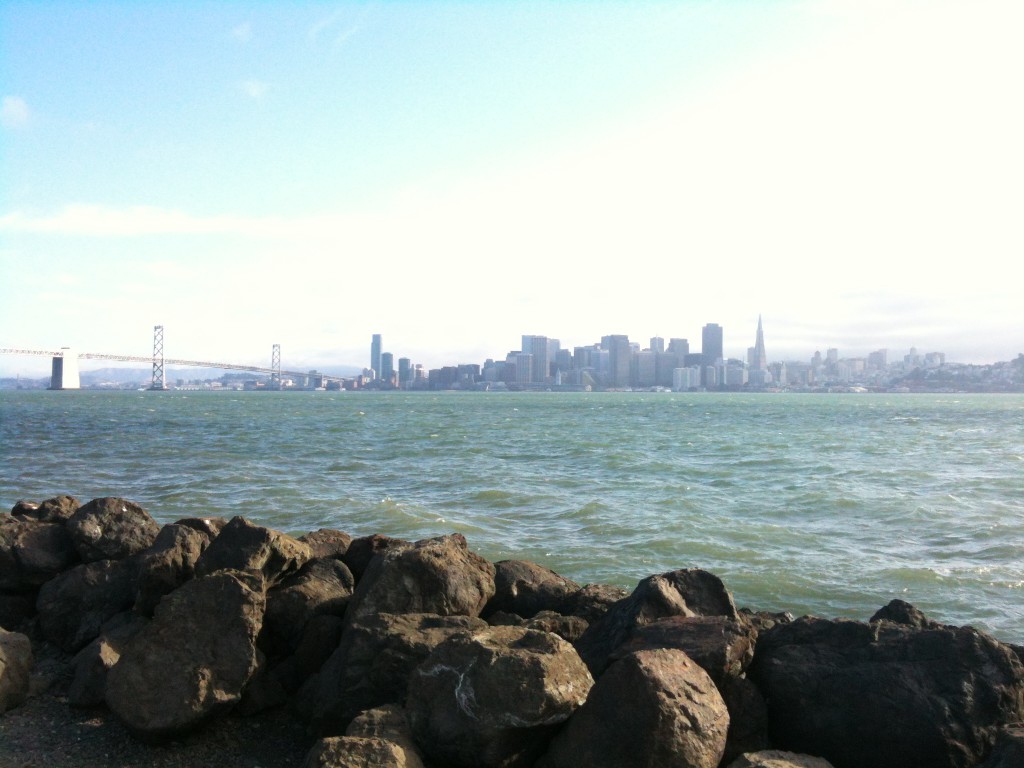 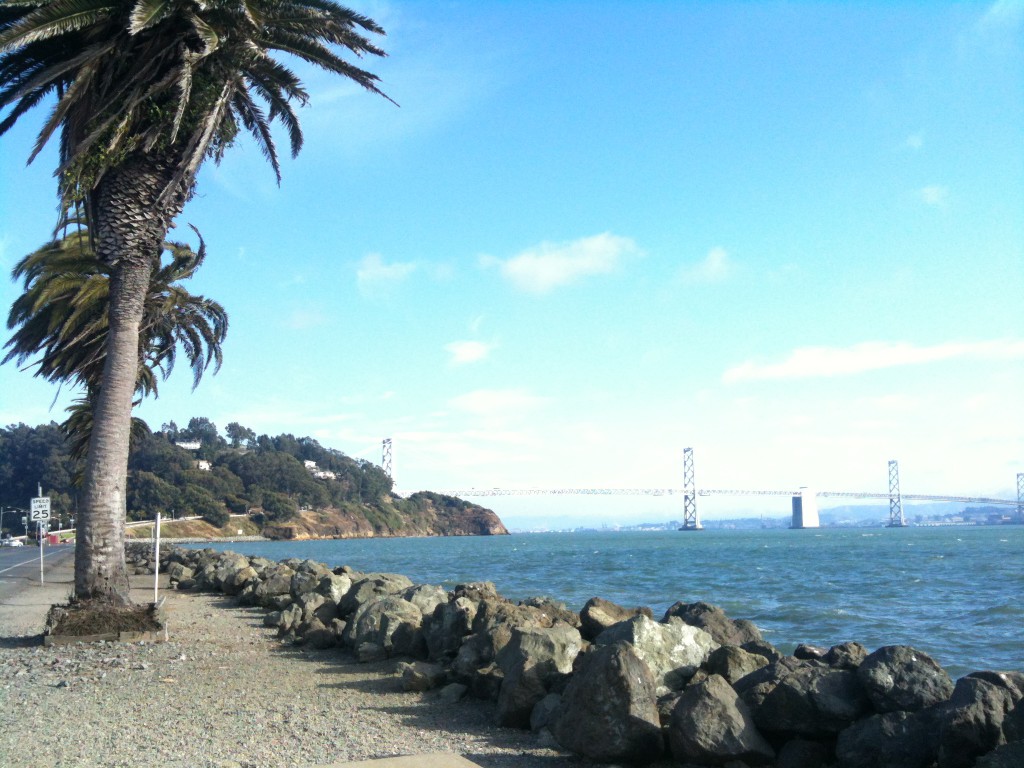 The venue itself is a pavilion – but what a pavilion (www.pavilionbythebay.com)! It comes with all the bells and whistles: 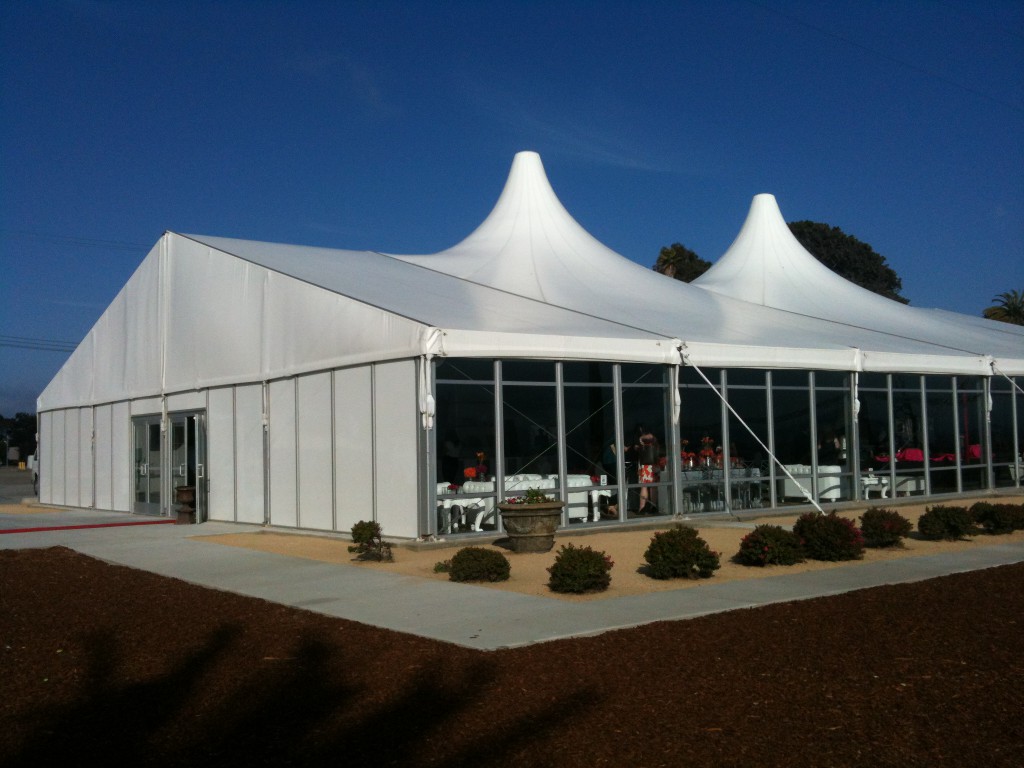 It’s a huge event space inside ( capacity up to 440 seated!) that lends itself to all sorts of decorations and lighting (provided today by allegra entertainment and events, allegraevents.com) – changing colors like a chameleon at the push of a button! Tonight’s fabulous party showcased some of the best wedding vendors in the Bay Area, and of course “tout le monde” was flocking toward the “soiree du jour!” Not only did I have the pleasure of meeting quite a few of the luminaries of the SF wedding scene – Joyce Scardina Becker of Events of Distinction (eventsofdistinction.com), for example, and Dina Balatti from Bella Celebrations (www.bellacelebrations.com); florist Pat Gibbons (www.patgibbonsfloral.com); photographers Kevin Chin (www.kevinchin.com) and Catherine Hall (catherinehall.net) and and and… – I also enjoyed tremendously all the displays and the incredible food. Speaking of which: passed hors d’oeuvres (tiny pieces of art!) and melt-in-your-mouth scallops on oh-so-creamy risotto were provided by Wine Valley Catering (www.winevalleycatering.com, associated with the venue, Pavilion by the Bay), and complemented by delicious cupcakes from Sift: 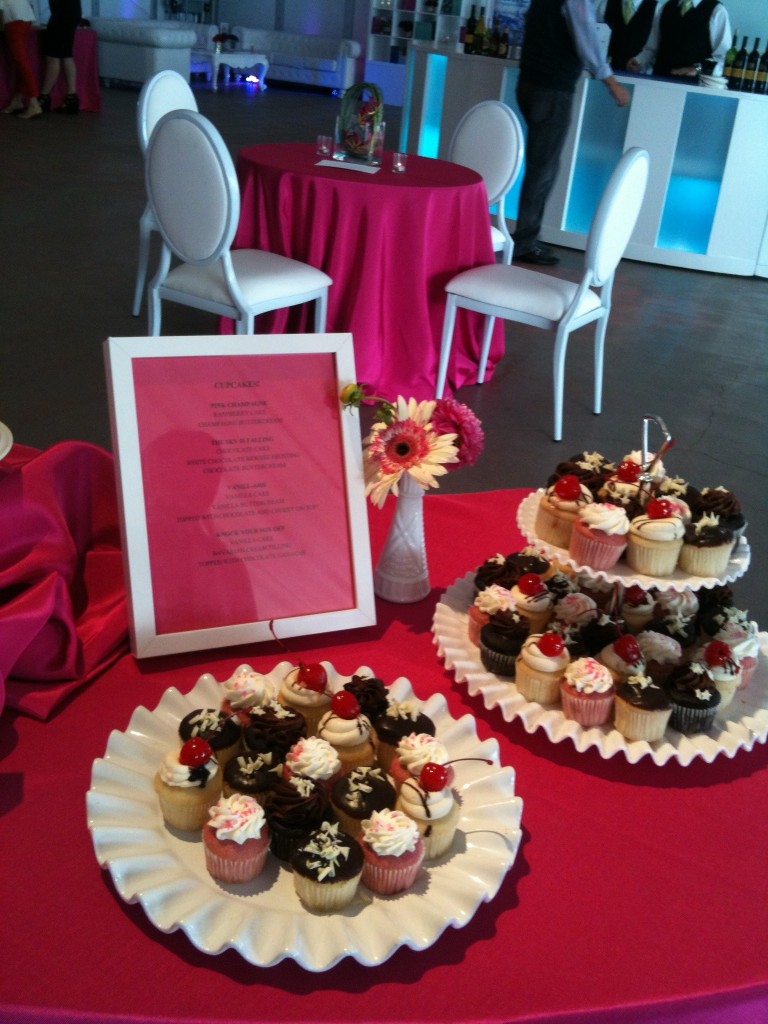 Mouthwatering, no? And they come in some 15 (fifteen!) different flavors… Will definitely file that information away for future (wedding dessert buffet planning) use! (siftcupcakes.com)

And since I’ve already progressed to dessert, I’ll round that out with the coffee revelation of the day. As is nearly a cliche, we San Franciscans always have our hands full, one of them constantly holding a cup of coffee. I am no exception, not at all! I am actually a coffee addict of sorts… and so Travelin’ Joe’s espresso bar was exactly what I needed right there and then (lattesandwaffles.com)! Just imagine how that’ll look and feel at a wedding reception: all the specialty coffees you crave, from lattes to espressos, AND fresh-baked waffles to go with them… doesn’t get much better than that! 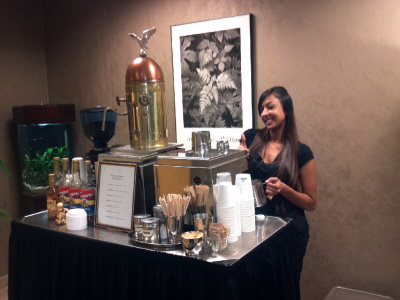 So that you don’t get the impression I went there only for the food – I also discovered stunning floral design: 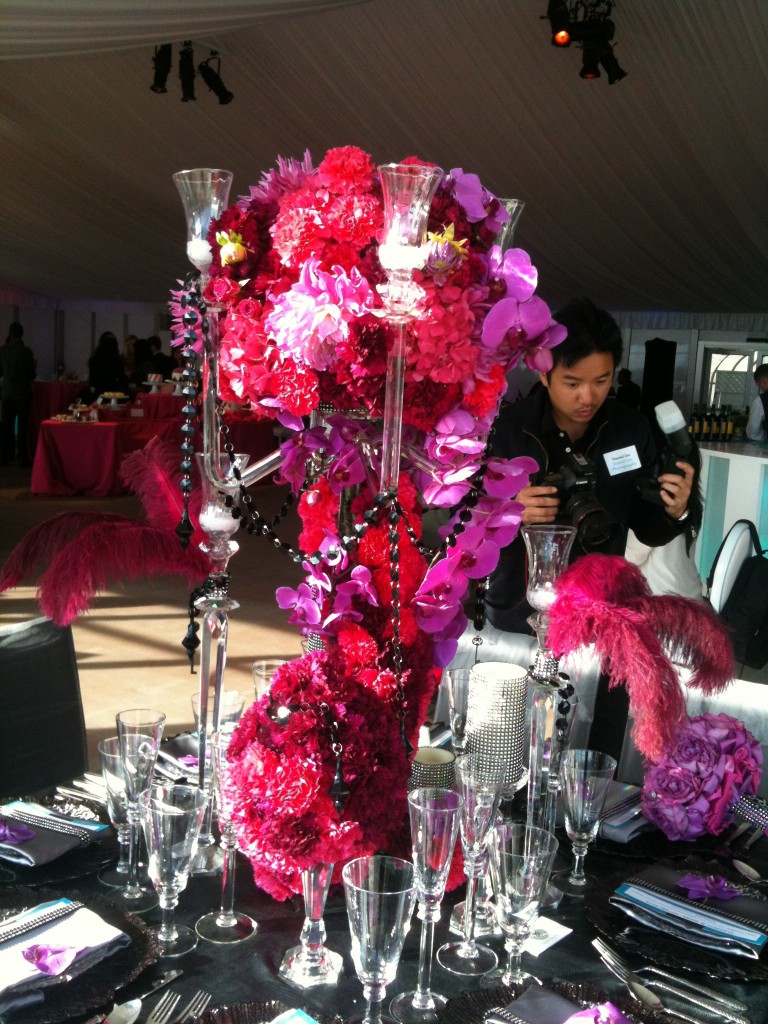 II especially loved the table settings to go with that huge centerpiece with a rhinestone “belt” around the napkin and menu (flowerdivas.com): 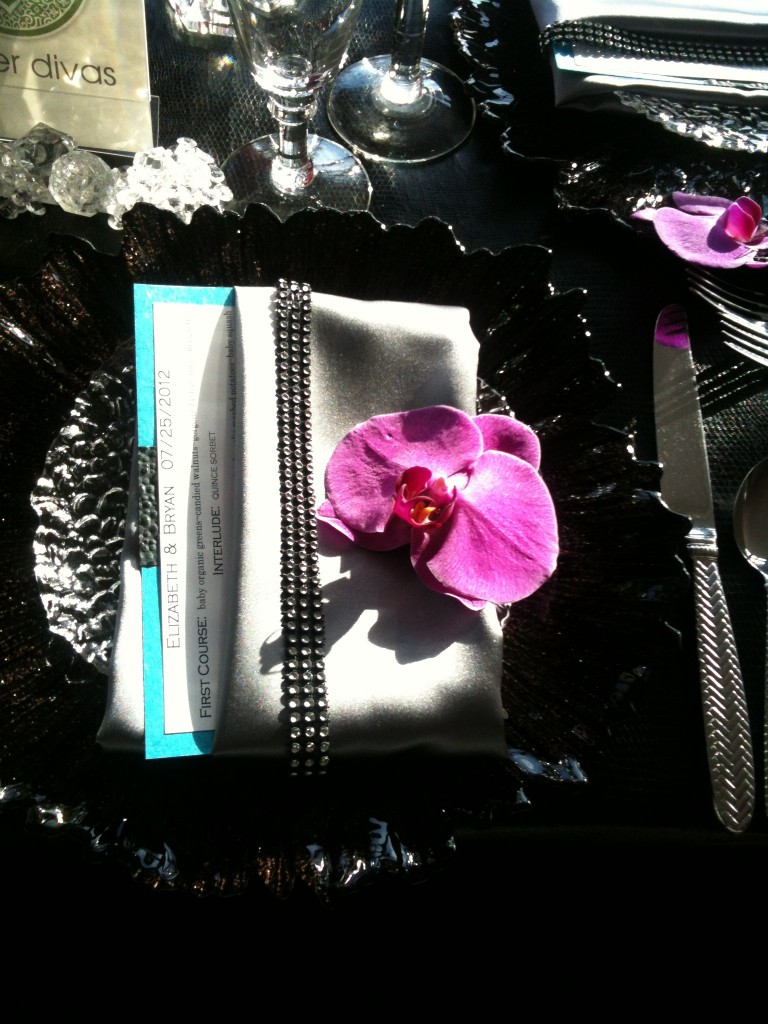 Lastly, my personal discovery of the night: I do love color!! You know, I always used to consider myself a “pastel” person with a preference for subdued color schemes. But I may have to reconsider! Look at this incredible table arrangement by Michael Daigian Design (www.michaeldaigian.com): 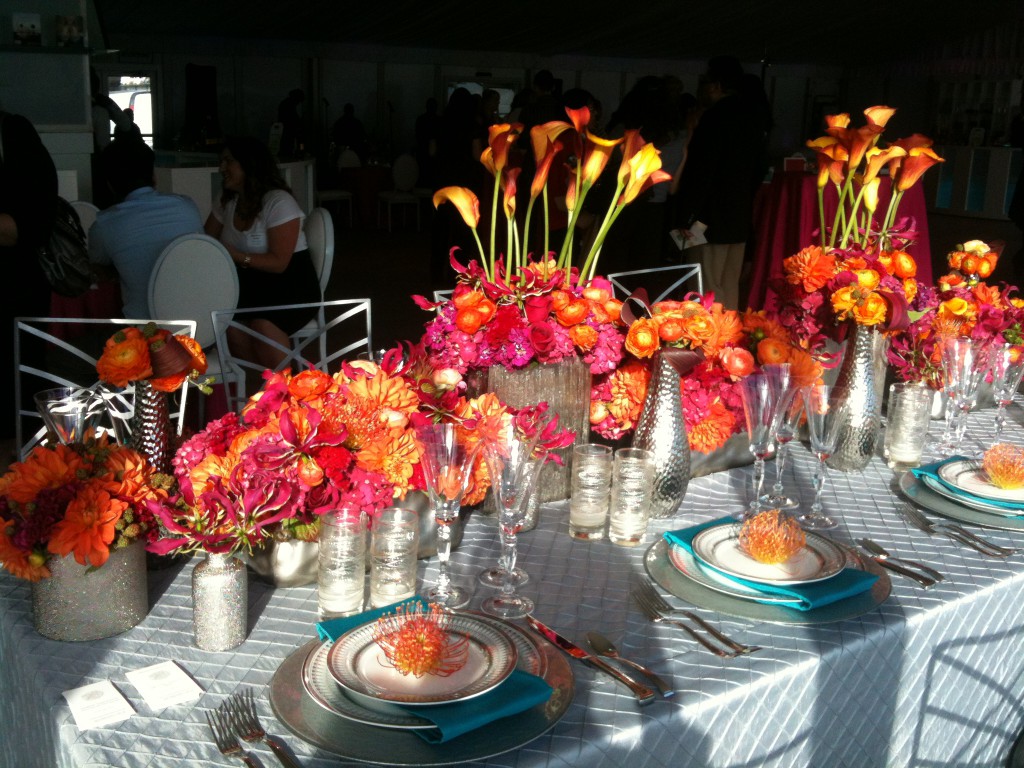 That stunning display could turn me into a true believer! One more proof that there is nothing like too much of a good thing…

When oncology nurse Dominique Augimeri and emergency room physician Rory Smith decided to tie the knot it was crystal-clear from the get-go that it was to be a family affair – family being their two English Bulldogs, Quebert and Mirra. 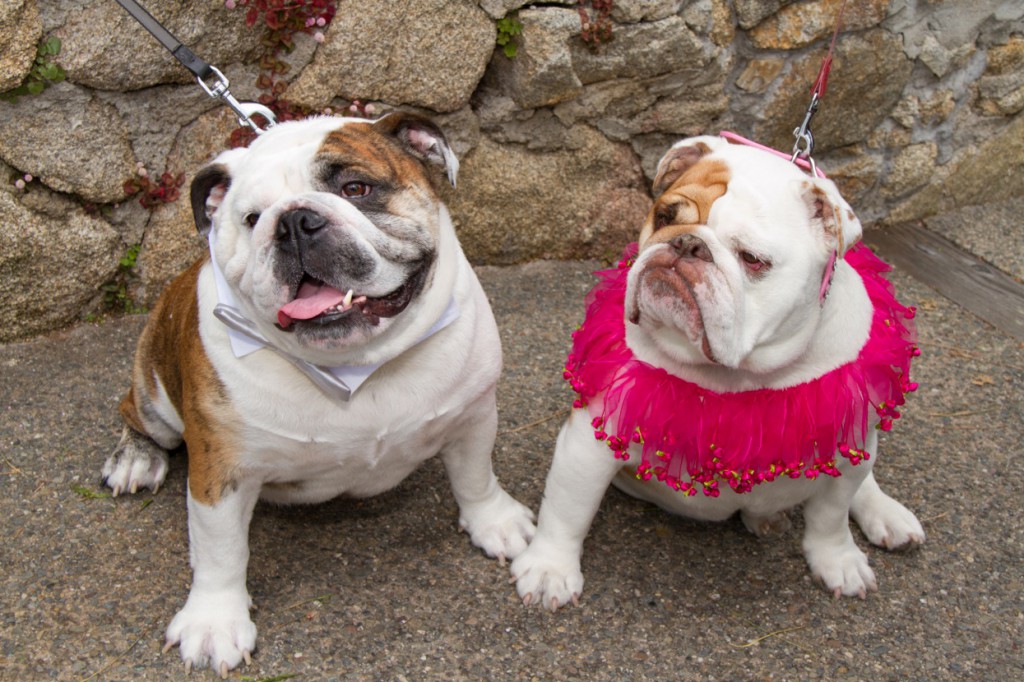 Dominique’s and Rory’s picturesque venue for their cliff side ceremony, The Highland’s Inn in Carmel-by-the-Sea, was the perfect meeting of the mountains and the sea – quite a change from their desert home!  Heavens smiled on their afternoon wedding ceremony with unexpectedly beautiful weather, considering it was April AND it had hailed immediately after the rehearsal concluded the day before.  Wedding planner Patty Speirs offered VIP (Very Important Pups) care to Q and Mirra, chauffeuring them to the wedding, getting them dressed in their wedding attire – he in a bow tie and she in a ruffled tu-tu in “Shocking Pink” – and bringing  them in for their grand entrance. 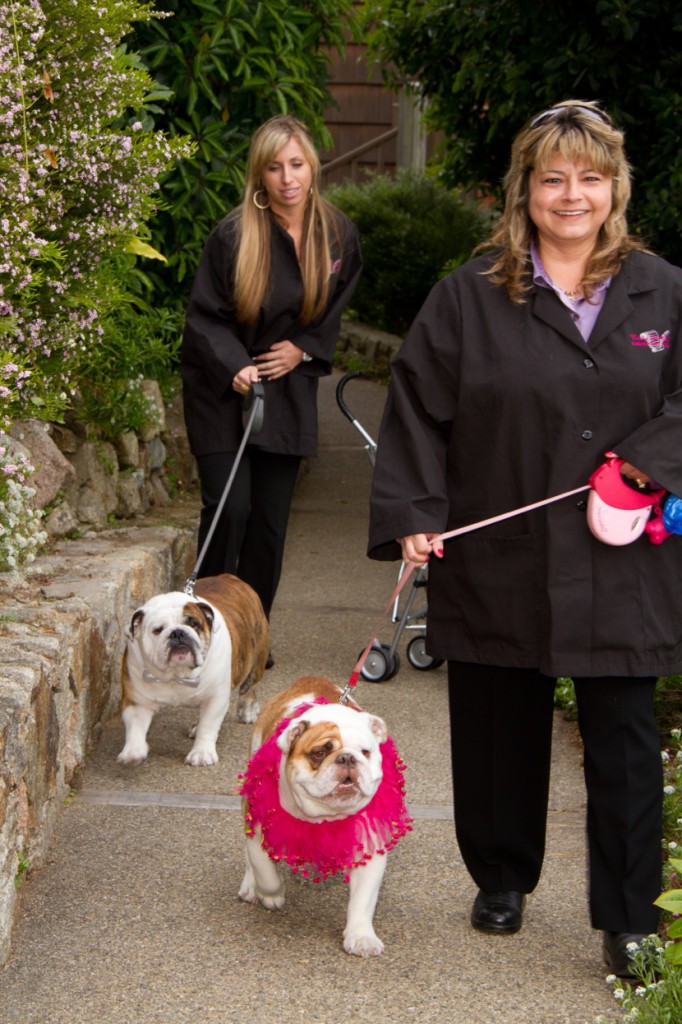 The two four legged stars were greeted with Ohh’s and Ahh’s and were just short of stealing the show for their “Mom” and “Dad.” Having the fur-babies as part of the celebration and mingle with family and friends was, hands-down, the icing on the (wedding) cake! 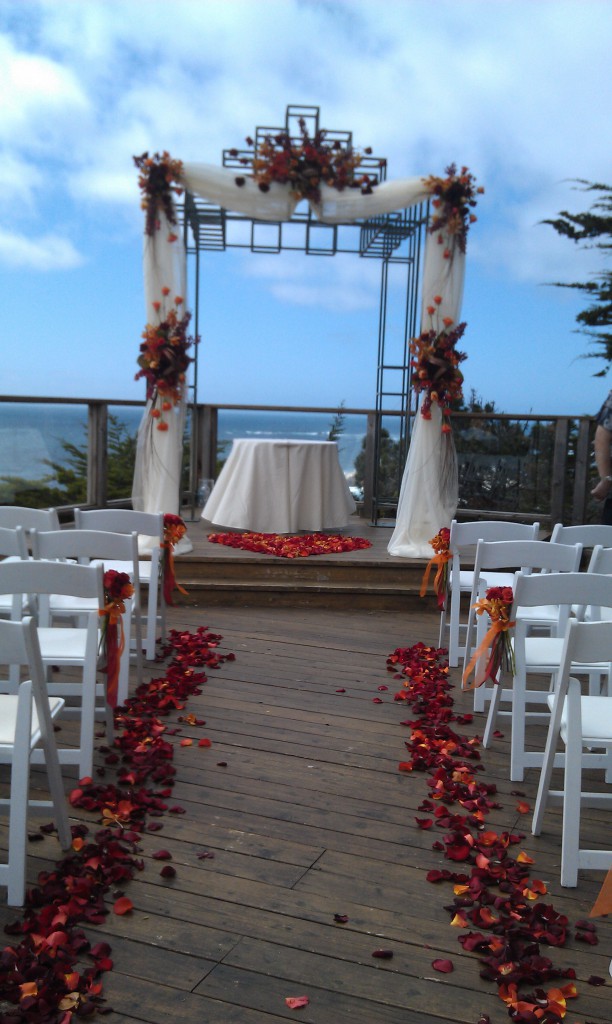 Speaking of which: While Dominique’s and Rory’s wedding color was Caribbean Blue with orange accents, they made ONE design exception: as a wag to their dogs, Patisserie Bechler of Pacific Grove applied brown paw prints running up the three-tiered wedding cake! 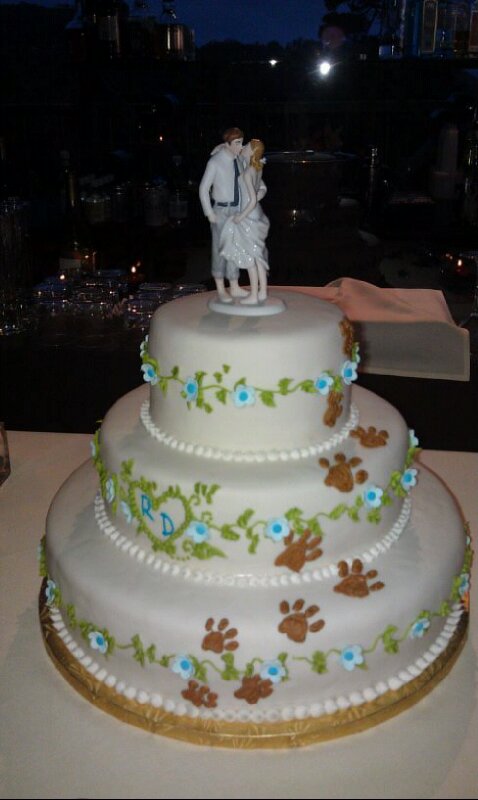 Although the pups choose to make an early exit, they were OF COURSE included in the official wedding photos. Planner Patty had vowed to get that perfect family portrait (the “mantel shot” as she referred to it), and photographers George and Cindy McCullough – fellow dog lovers! – captured the magic and made it happen. See for yourself: 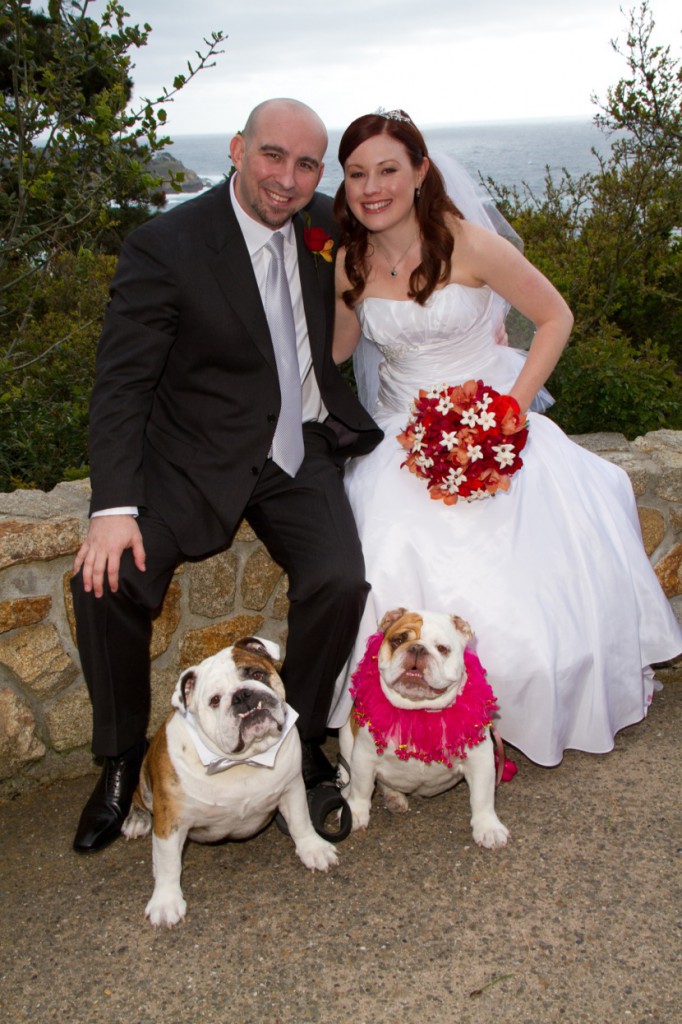 The day was just perfect for Dominique and Rory – surrounded by all the important people in their lives, including their canine “kids.”  They wouldn’t have had it any other way… 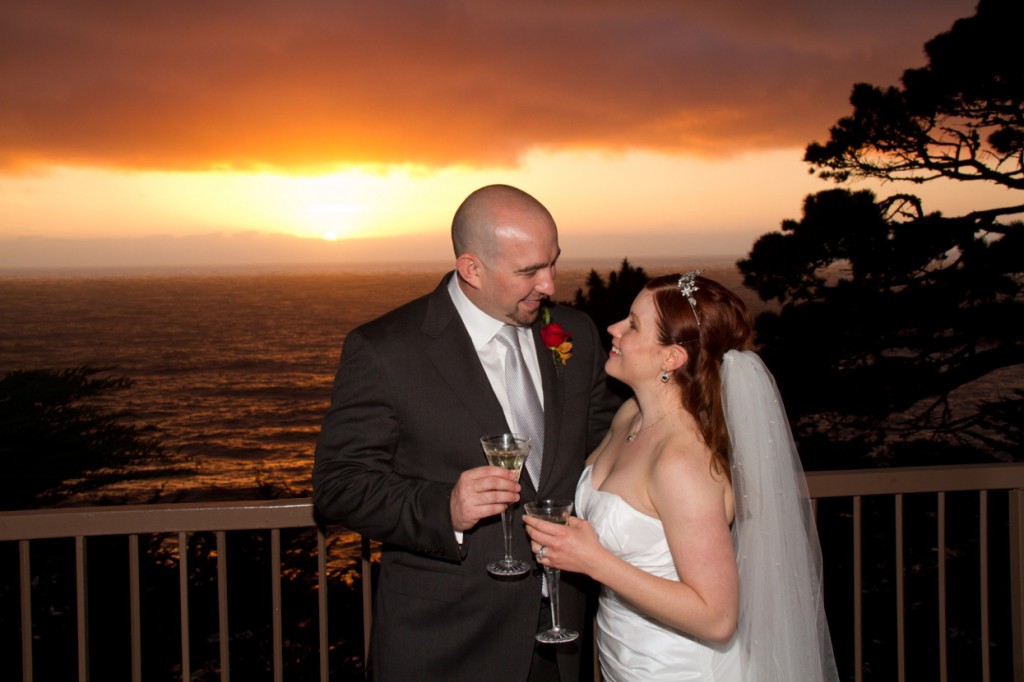 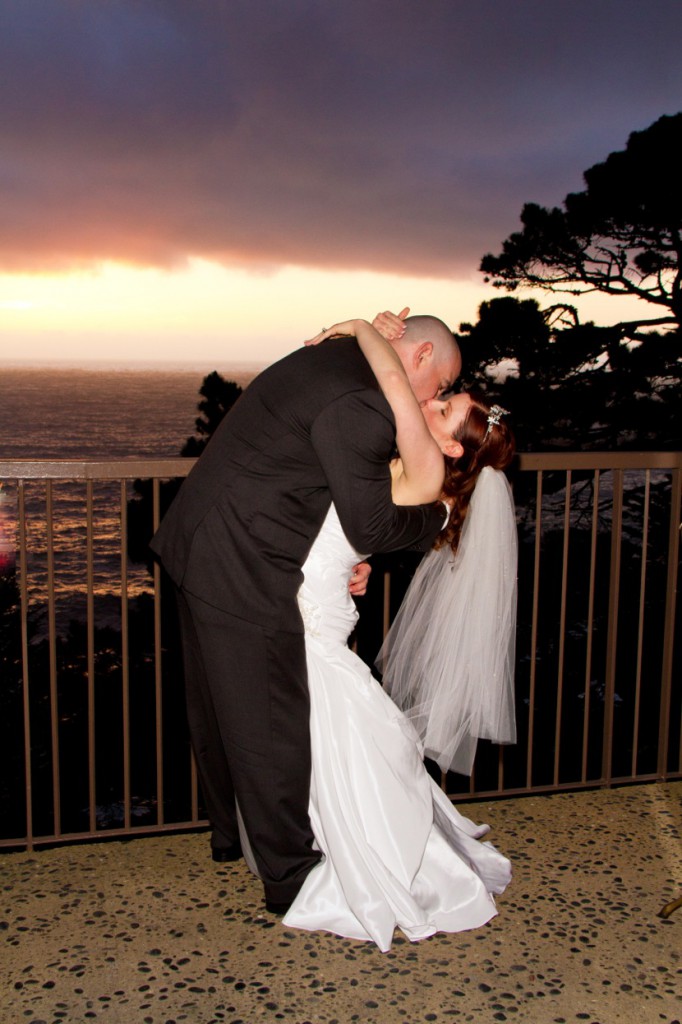 What’s the most unusual wedding you can imagine? For example, do you know someone who got married on top of the Golden Gate Bridge? Crazy, right? 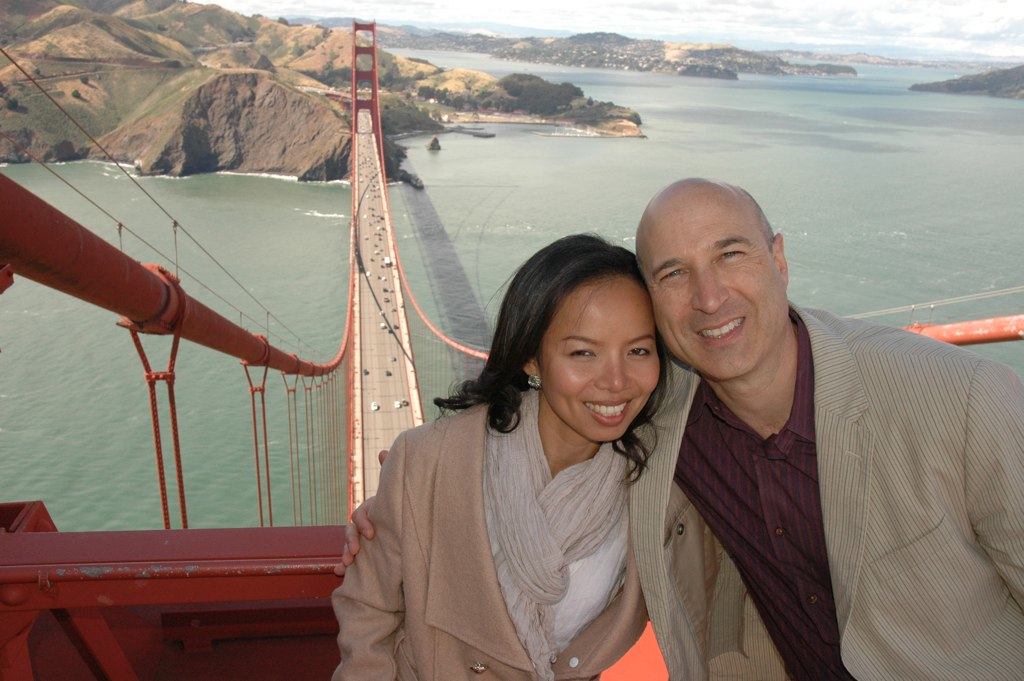 Well, I do! Greg and Oh. And their wedding way up there was just the proverbial “tip of the iceberg” of their incredible love story. Want to hear it? Here we go:

On the day he turned fifty, Greg sat down all by himself and took stock of the first half of his life.  Life had been good to him. He had enjoyed a succession of happy relationships. He had always followed his passions and been successful in what he did. Starting with a Masters degree in Education, he had become a public school teacher. Then he had studied Classical Composition and finally found his passion: he studied Screenwriting at NY University and achieved an MA degree here as well. He was now teaching Screenwriting at UC Berkeley. His first feature film had been accepted at the renowned Sydney film festival. Having become a SF firefighter – and just having been promoted to Lieutenant – had allowed Greg flexible work hours and a steady income to support his artistic pursuits. So far – perfect. 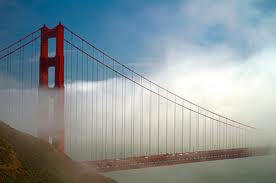 And yet – the most important dream of his life still remained unfulfilled: to find his partner for life and have a family. On that very day, Greg decided to make this dream his absolute priority for the next years of his life. And – unsurprisingly – he tackled this new task with his usual systematic approach and perseverance.  He realized that at his age his chances of finding a partner young enough to still have children were slim at best, especially in a youth-centric Western culture like the US or Europe. On the other hand, he had always admired and also studied Asian cultures, especially the Thai Buddhist culture with its emphasis on peace and harmony. That’s where he would start looking for the perfect mate: College-educated, sharing his passion for art, music, and literature, non-smoker. To maximize his chances, he chose an online dating service.

Little did he know that at the very same moment, at the other end of the world – in Thailand, actually – Oh, a College-educated young accountant in search of the perfect husband and practicing Buddhist, was making a wish list of her own: College-educated, Western culture, non-smoker. She had always admired the Jewish culture with its emphasis on learning and education – so, preferably Jewish (which Greg happens to be…). Age difference no problem. To maximize her chances, she chose an online dating service… the same one as Greg!

Done deal? Not at all. At their first date, the two were not overly impressed with one another. They both kept looking. But still – their mutual interest was piqued. They stayed in touch via phone and Skype. It took months until their first shy kiss, and it took several more visits of Greg to Thailand to have their encounter blossom into a romance. On November 1st, 2010, Greg proposed on exotic Phiphi Island, and Oh let herself be persuaded to follow Greg to America.

As unusual as their whole story is – just as unusual was their wedding, truly one-of-a-kind. They wanted it to happen on top of the world – well, at least on top of the Golden Gate Bridge! As a San Francisco firefighter, Greg was able to obtain the exceptional permission for a site visit at the top of the South Tower on June 1st, 2011, accompanied by his bride and his officiant (his colleague and friend Mark, who had become an ordained minister just to be able to marry the two). Up they rode in the tiny, drafty elevator to a platform some 750 feet above the water of the Bay; and from there they had to climb up a metal ladder. Oh, totally fearless, kicked off her high heels, climbed up, and got married – barefoot! But married they got, look here: 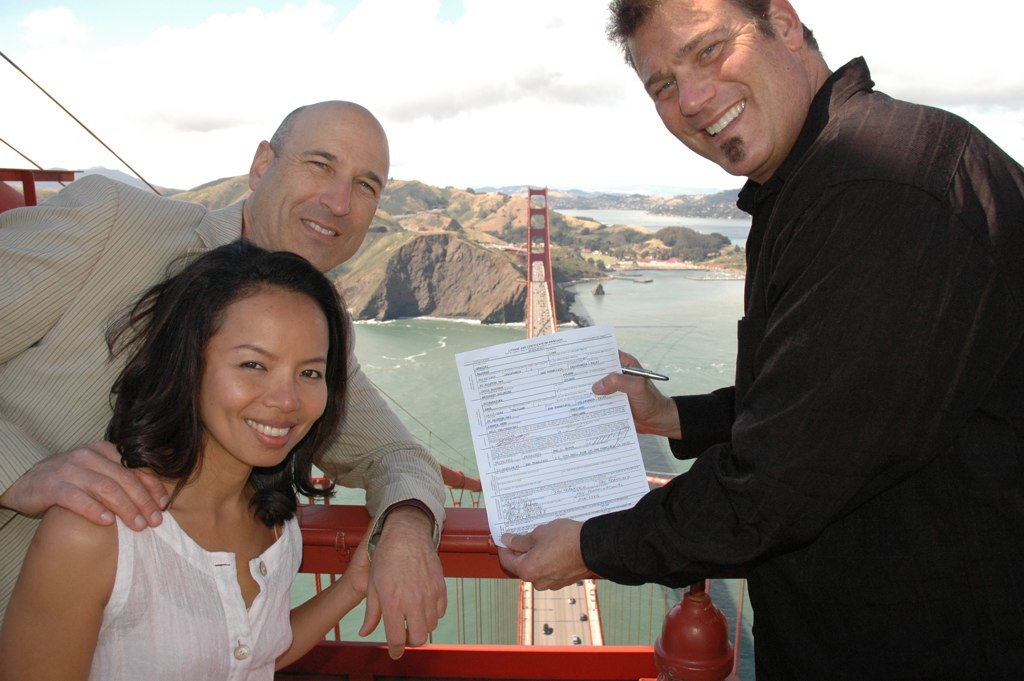 Their long, tortuous journey had finally reached its destination. That same evening, they raised their glasses at an intimate wedding dinner with family only: 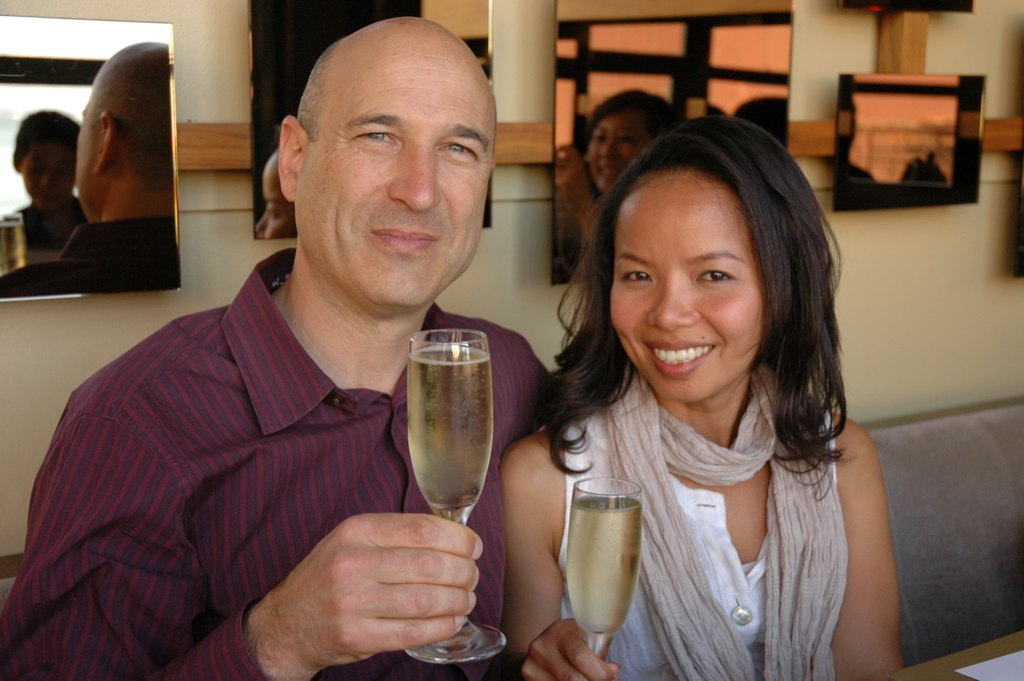 A few months later, the two invited friends and colleagues to a belated wedding dinner at the romantic Forest Hill Clubhouse in San Francisco. Oh, a terrific cook (another passion she shares with Greg!) had insisted on cooking everything herself, and the whole party feasted outside under old trees and the stars.  And this year, the two got married just once more – in a traditional Buddhist ceremony in Oh’s native Thailand, in Bangkok: 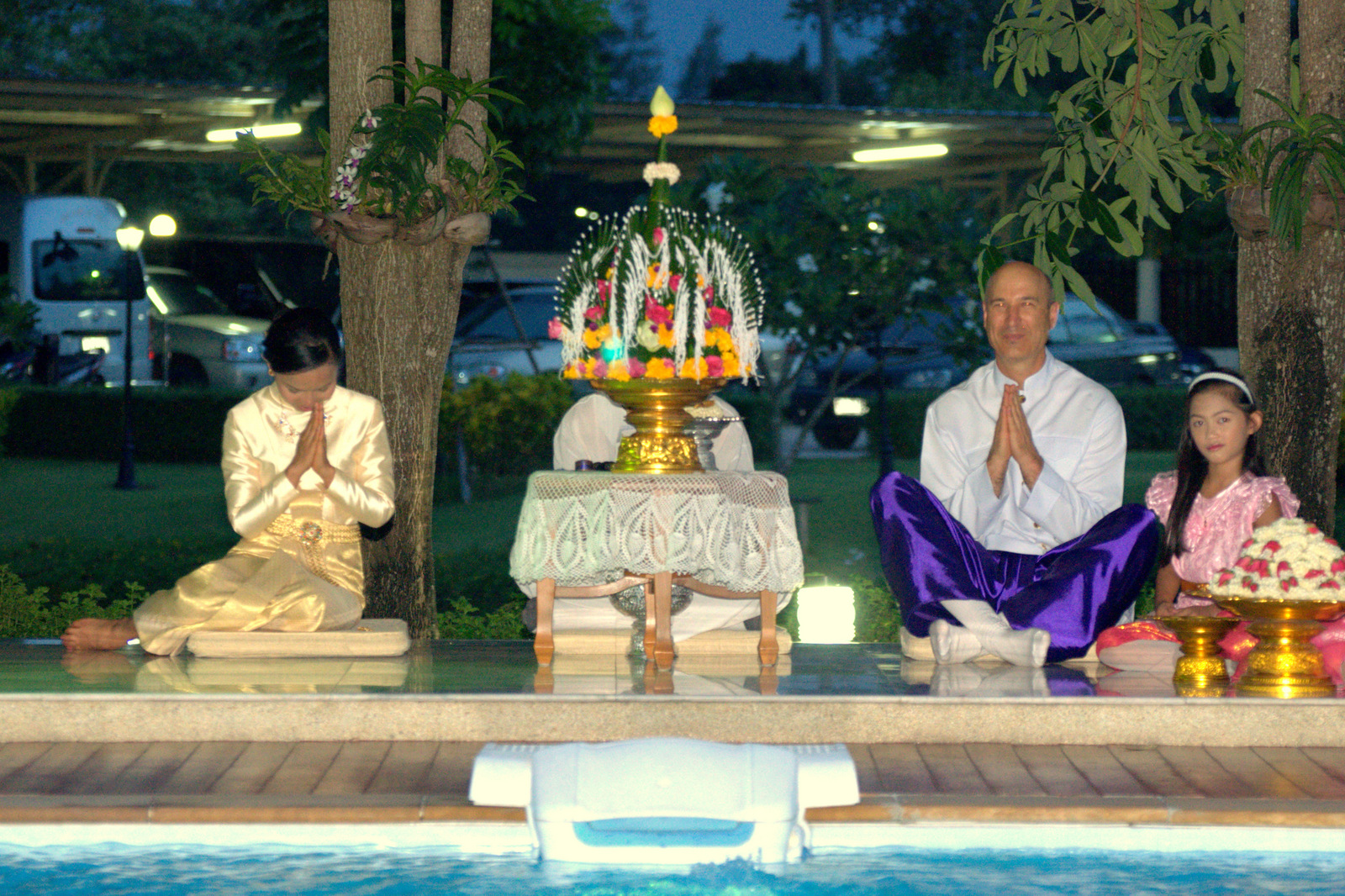 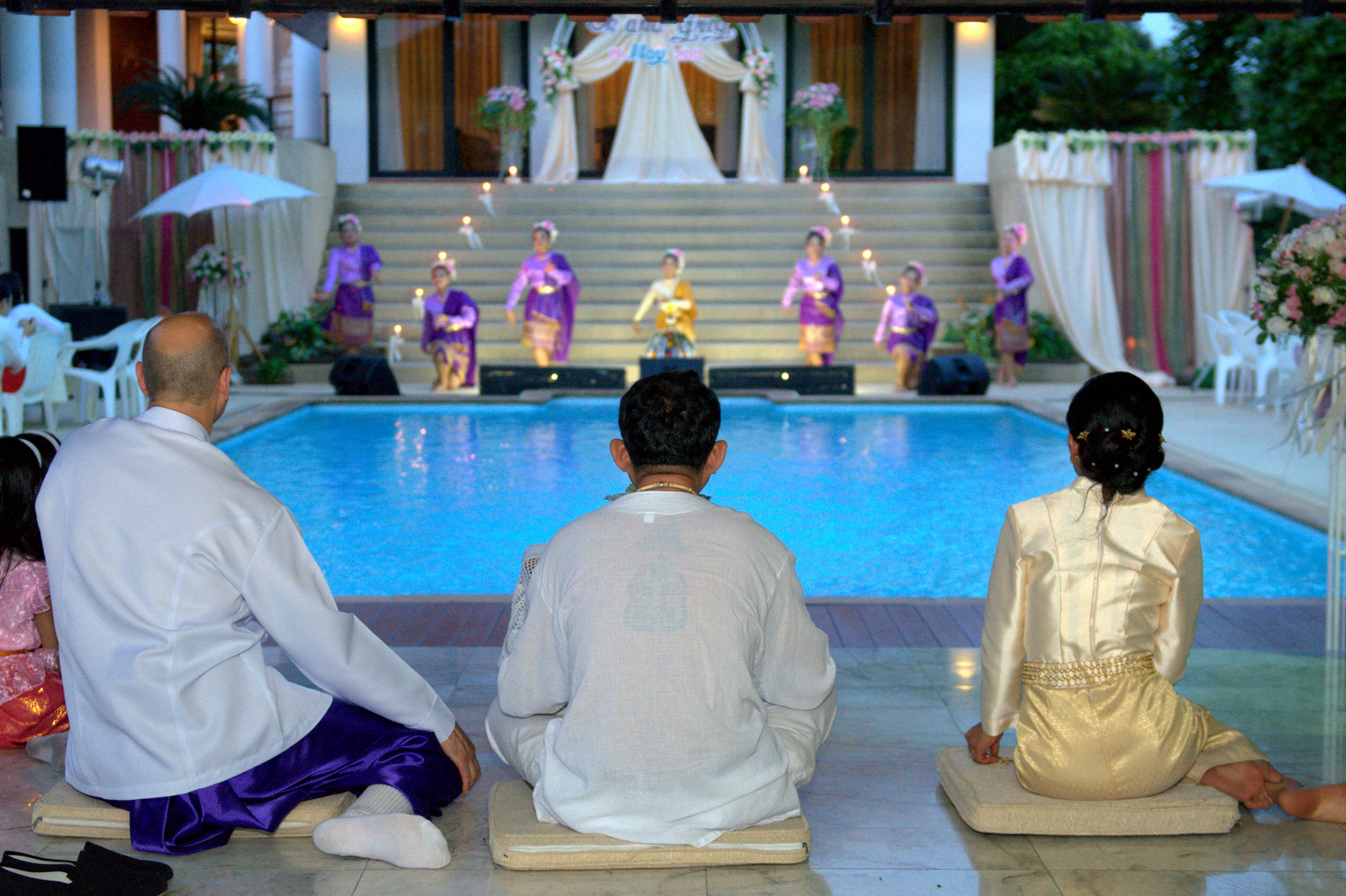 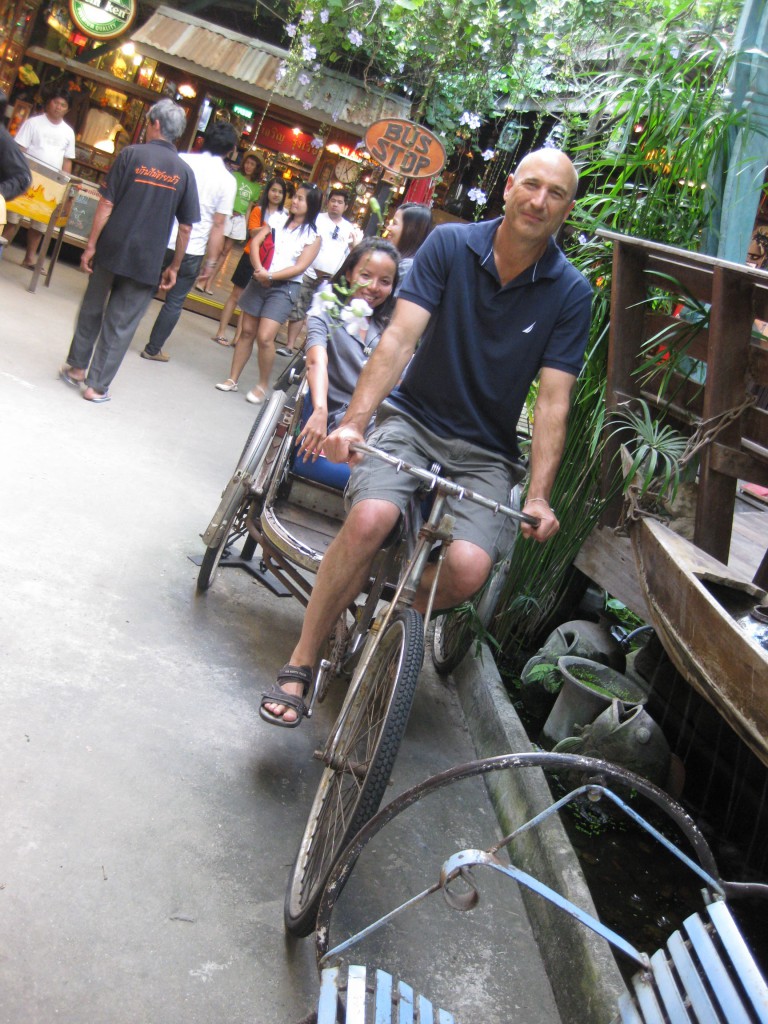 well, just kidding… and then they enjoyed their real Honeymoon in Myanmar, concluding the yearlong wedding festivities! Oh has meanwhile settled into San Franciscan married life, assisted by her new four-legged “stepdaughter” Sadie, Greg’s Yellow Labrador Retriever. Now life is really good for the three of them!