Dear Canines, I have to offer you my sincerest apologies. I have shamefully neglected you lately, writing about your humans only. Which is not right – among other things because of the name of this publication: Wedding Woof!

So here’s to the “woofs” in Wedding Woof – and especially to those who were or will be stars in my weddings at A Day Like No Other! After all, I am the only wedding planner in all of Northern California specializing in dog-friendly weddings… so, now I’ll finally live up to that reputation and give all my readers a glimpse of how my couples have included (or will include) their beloved companions in their weddings.

Let’s start with Natasha and Fabian. They had a very traditional wedding with a full Catholic Mass for their ceremony, followed by a huge celebration for close to 250 guests. Their beloved boxer girl wasn’t allowed at the Church (of course not…) nor at their venue. But the two found a way! 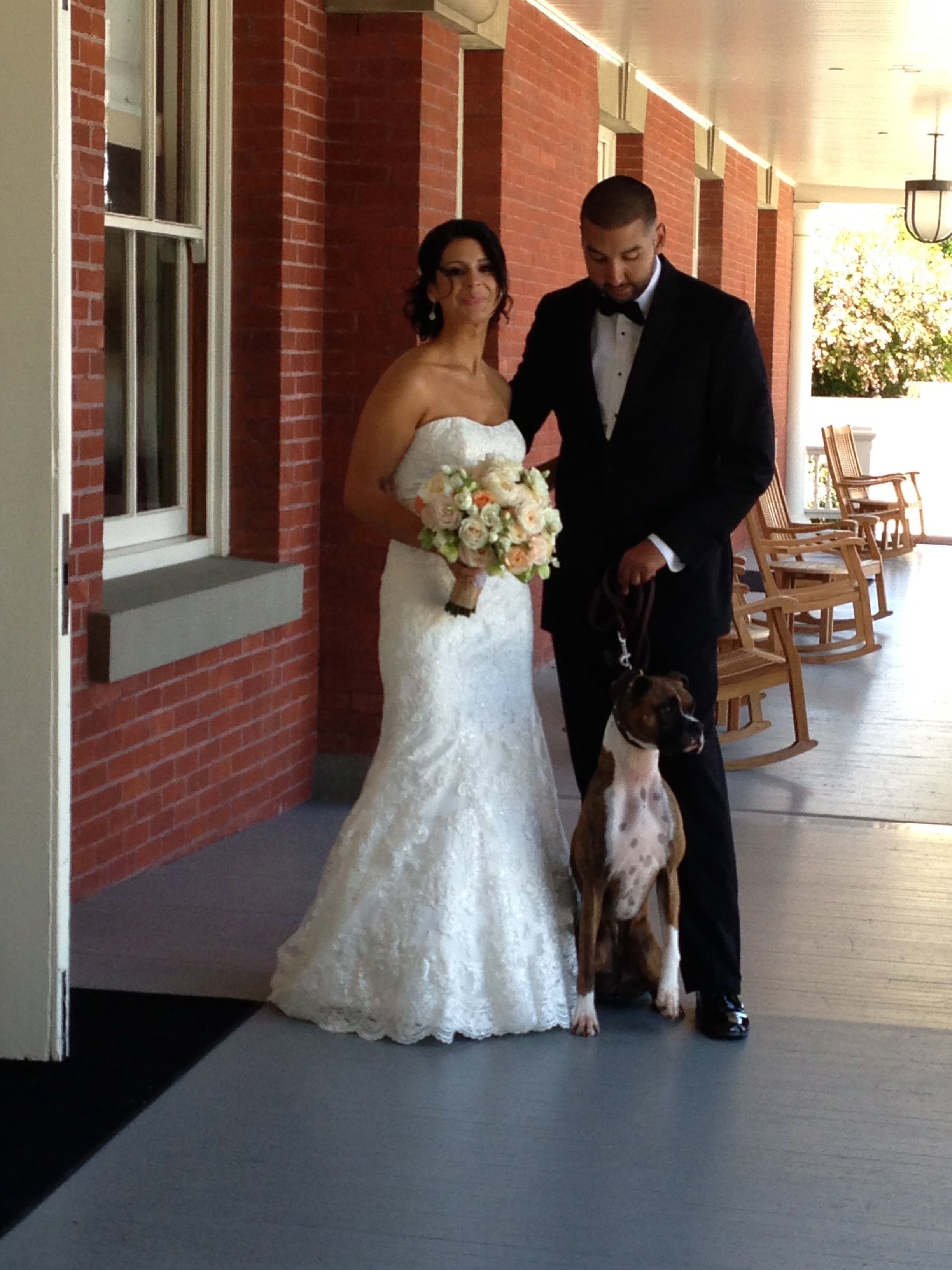 They headquartered in a beautiful dog-friendly hotel very close to their reception venue – and that’s where they spent the night before their wedding, the morning of their wedding day and later on their First Night (Inn at the Presidio). That way they had their pretty canine with them most of the time (and for the photos, of course!) – and while they were away, she was lovingly being taken care of onsite, just waiting for her humans to return to her at the end of the day, “just married!”

“Lucky” was even luckier! Her people (Peggy and Jose) got married outside, so their rambunctious puppy was allowed to stay onsite – but the waiting time until finally she was allowed close to her master and mistress again, stretched to near infinity for her… 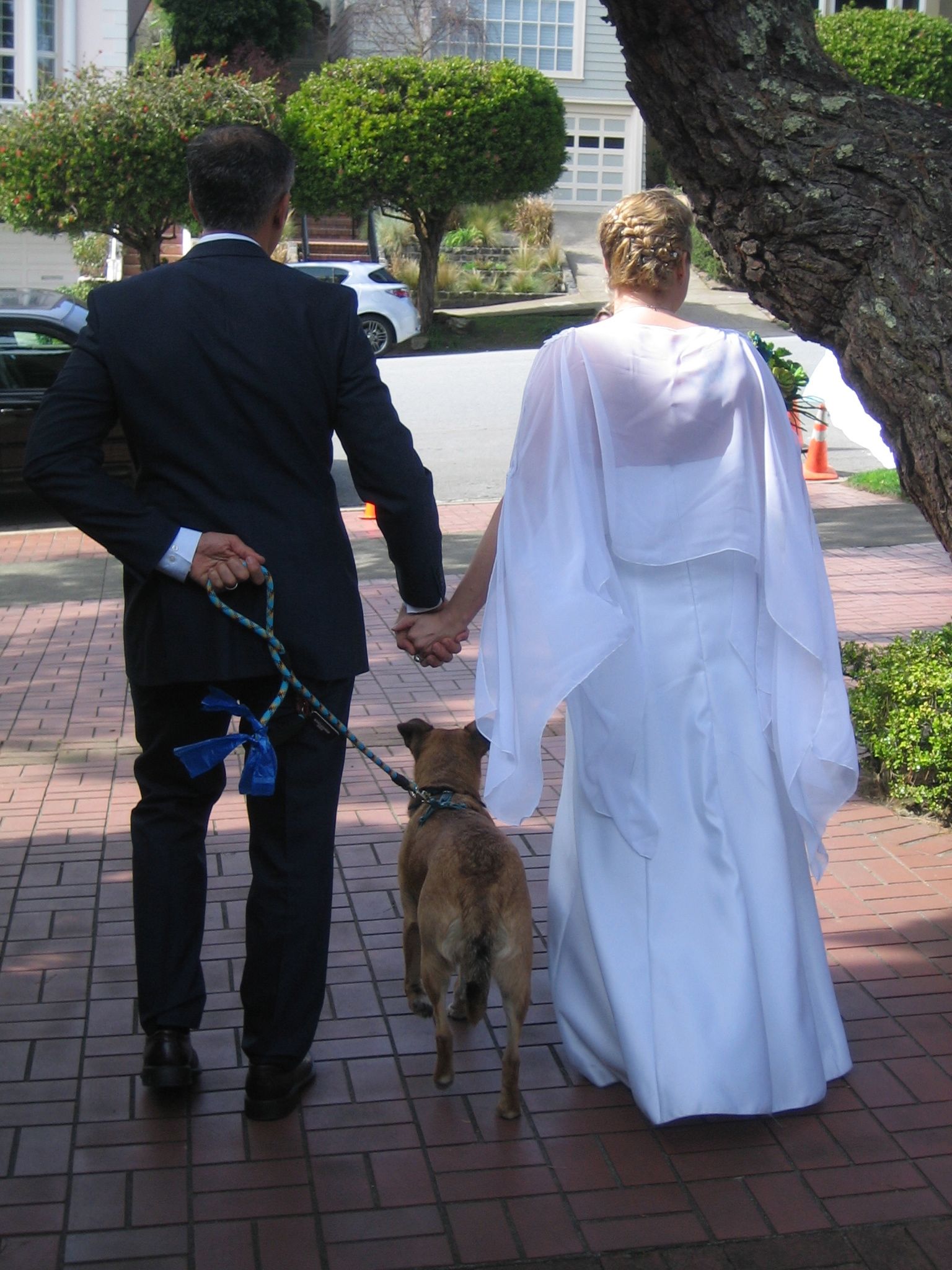 Now it’s time for a walk – off to married bliss!

Next up: Pastis and Milo! They were allowed to accompany their humans (Valerie and Andrew) all the time at their very dog-friendly wedding venue (Pasadera Golf Club, now Jack Nicklaus Golf Club, in Monterey). They even were the pro-forma ring bearers… 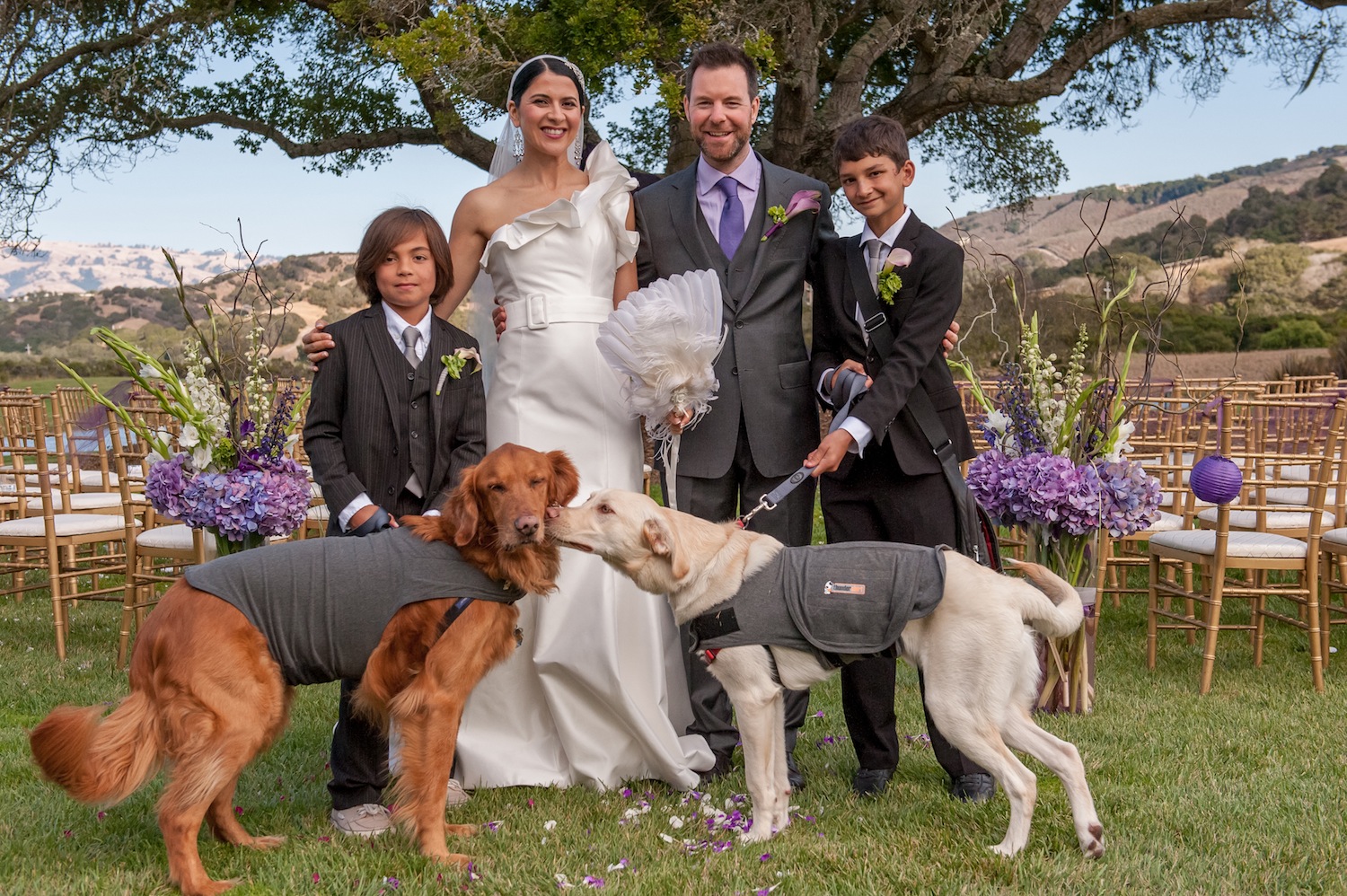 Cody no. 1 is living with Amy and Tec who will get married in San Francisco in August. I happen to know because I am their wedding planner! And Cody happens to know, too – he actually mailed the “Save-the-dates:” 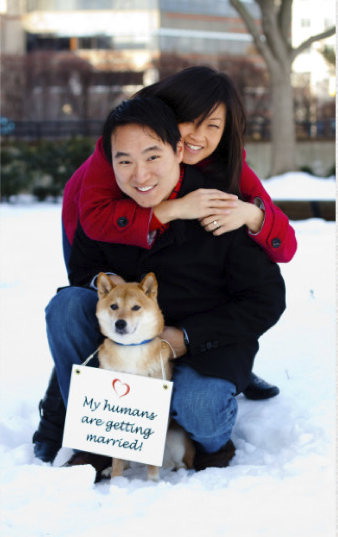 And here’s one more cutie: Cody no. 2. He is living with Pamela and John, and he will definitely be the star at their wedding in July: 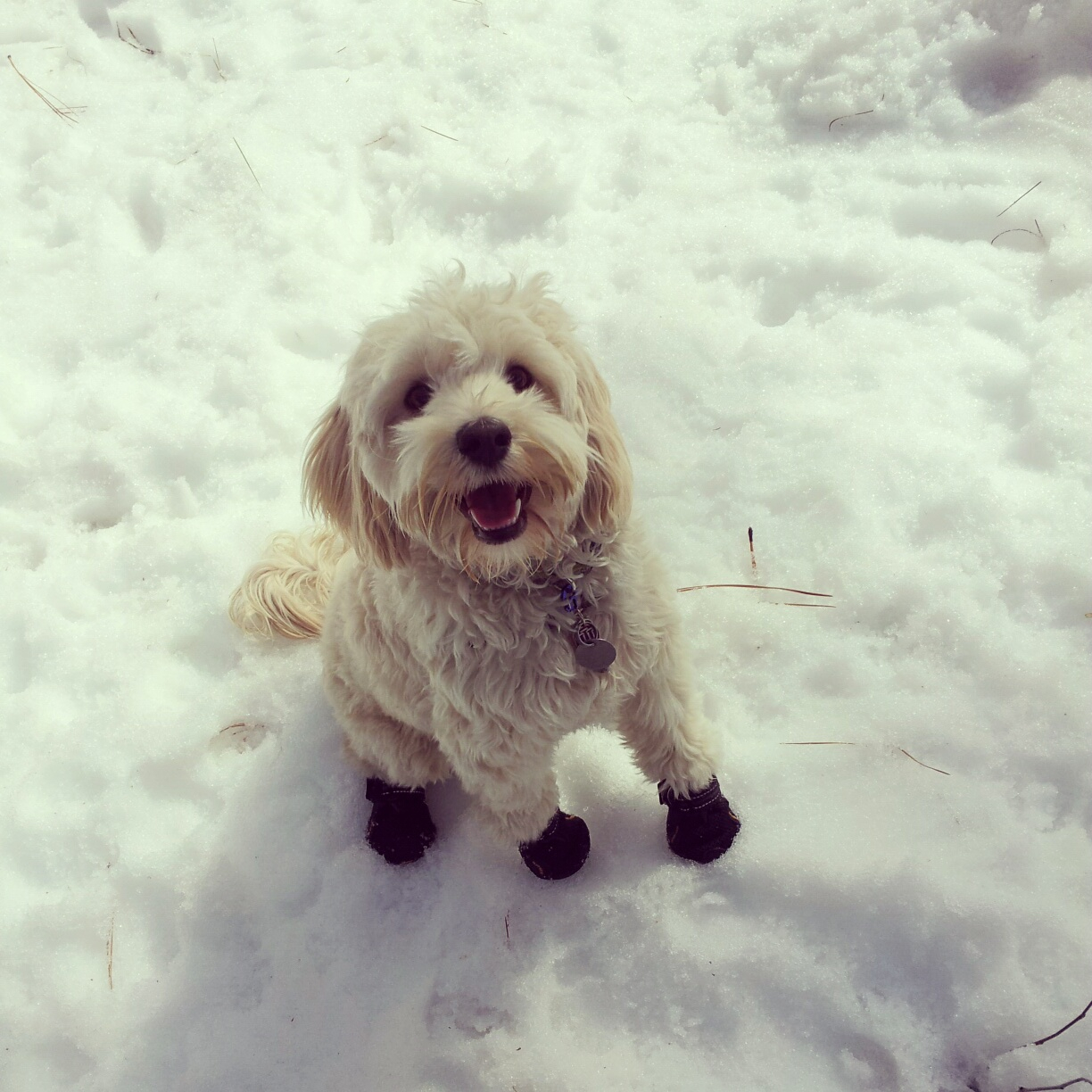 His humans went to great lengths to find a totally dog-friendly venue so he could be with them all the time. Diablo Ranch in Walnut Creek proved to be the perfect choice for a wedding celebration equally kid- and dog-friendly, with a carnival theme and lots of fun for everyone.

Last but not least there is Buzz, an Australian Shepherd, without whom his Master’s wedding would have been – unthinkable! So Philipp, his loving Dad, and Michelle, his Mom-to-be, went on a quest to find an elegant but dog-friendly venue. On a hot day in August, they and their constant companion Buzz visited and instantaneously fell in love with Stonepine Estate in Carmel Valley. Said the groom, “Buzz used the first moment we were distracted to escape and jump into the reflecting pool – to emerge dripping and dirty, shaking vigorously, a total mess… Michelle and I were sure that that was the end of our wedding dreams at Stonepine! They would never let us come back. In a word, we were heartbroken. But – miracles still happen! Instead of being shocked, someone appeared with a stack of fluffy white bath towels for the canine visitor’s convenience… needless to say, that’s where we got married, with Buzz in attendance!” 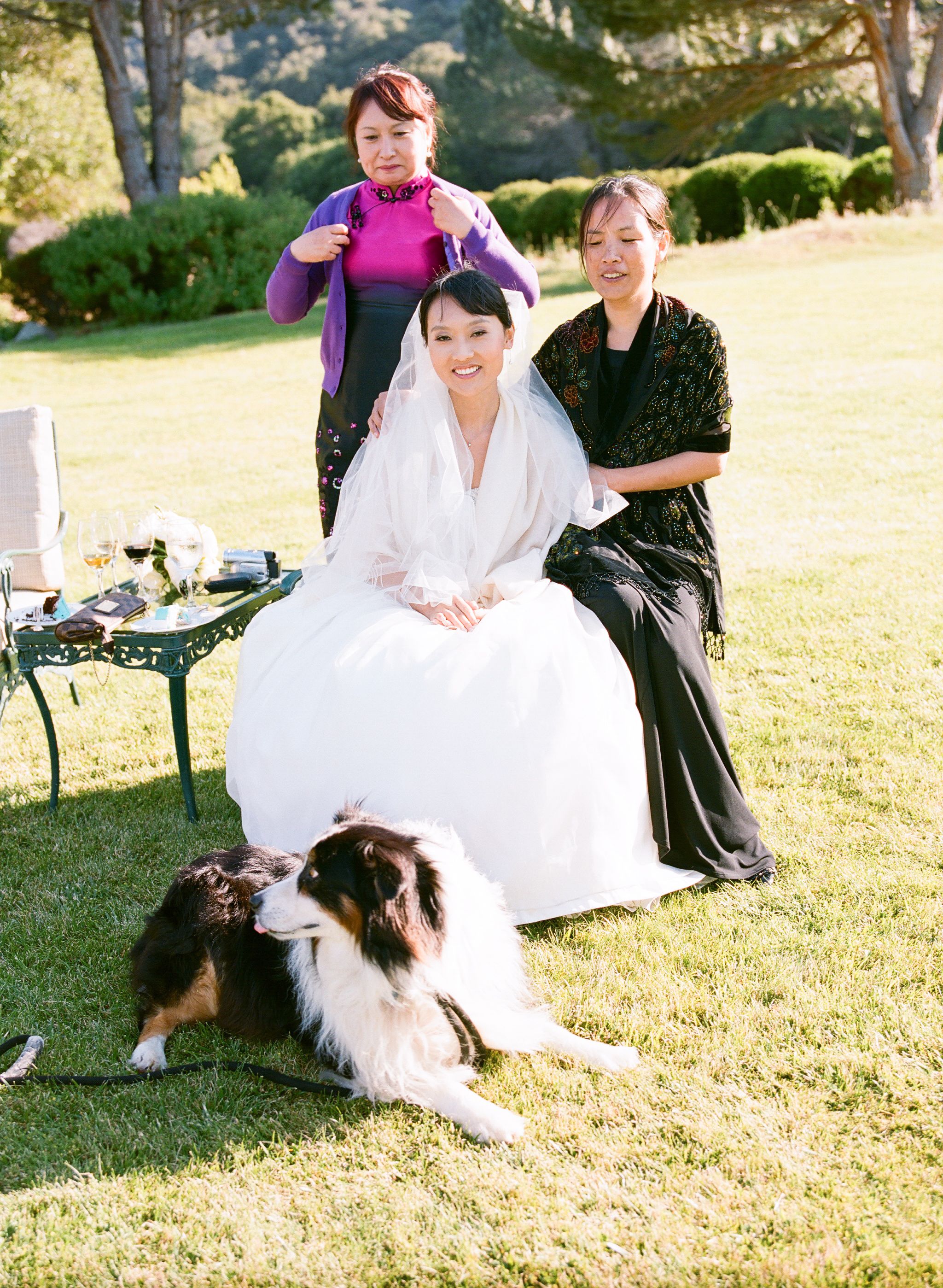